Mucky Pups - mayhem on the Mudflats!

On a sunny afternoon in late December I’d already exercised my lovely doggie guests (Hugo, Hula & Murphy) in the morning on the fantastic Copacabana beach - heaven for dogs with beach and a Lagoon for swimming. But as my daughter was taking her Boxer out I went with her, treating my pack to a second walk. The dogs were thrilled to see their leads again and excited to be going on another adventure.

We went to the local Estuary which at low tide reveals mud flats. This is why my walks there tend to be at high tide when the water’s right up to the grass bank.

Unfortunately at this time it was low tide - and sure enough in places there were wide expanses of thick black mud.

To keep Hugo and Hula occupied I was throwing the ball and they were happily chasing it and playing together.  Murphy occasionally gave chase but mostly he Elly were trotting along sniffing - all was right with the world.

We’d been out a fair time and began heading back when suddenly, and quite out of character, I realised Murphy the White Westie was about to make for the water. But to reach it first meant him crossing a 5 metre stretch of thick black mud!

I immediately called him – but it was obvious his mind was made up as he determinedly waded, up to his chest in mud, across to the water.

Then, suddenly Elly too was in the mud also heading for the water! As one Claire and I called ‘Elly!!’ but just like Murphy she ignored us too !

Then before you could blink, Hula, obviously wanting to see what was going on, was no longer interested in ball play with Hugo, instead she was in the mud charging out to the others. Called her, she also ignored us.

Hugo was now alone on the grass (ball still in mouth – he loves a ball). Now,  in theory there was still time to call him, but at this point we were laughing so hard at the comedy of mud and mayhem playing out before us we both were rendered incapable of speech! So naturally Hugo had to investigate and with his glorious golden blond soft lamb coat, he too jumped into the sludge.

(Thinking about it later, even had we been able to call his name, judging by the fact the other 3 all ignored us it was highly likely Hugo would have too!)

Hugo was first to came out – looking like he was wearing wellingtons. Next Hula emerged with black leggings. Meanwhile Murphy and Elly were still out there as they both briefly got stuck in the horrible black mire. 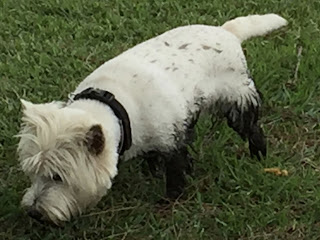 Elly who had gone in up to her chin when she got stuck was particularly filthy.

And Murphy came out looking like a chess board.

We managed to find some clearer water off a ramp to get the worst of the fetid black goo off before they got back into the car. But this mud clings and really smells so back home all four were shampoo’d in a nice warm shower.

All in all it took a bit of work and time getting four dogs clean – but the laugh was worth it.

A usual day in the life of a perfect pet sitter….

N.B. Though it was bedlam with dogs and mud everywhere, I managed to take a few snaps. The pictures were taken quite far off so I had to zoom and lost clarity, but they’re a good record of what occurred.

Hugo, Hula & Murphy's owners have all kindly written great reviews of their dog's stays. To read them click here 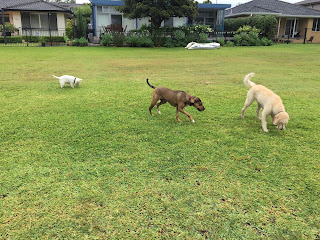 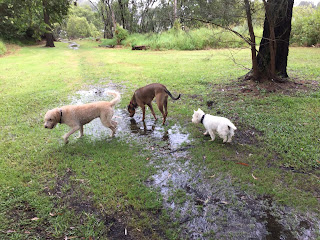 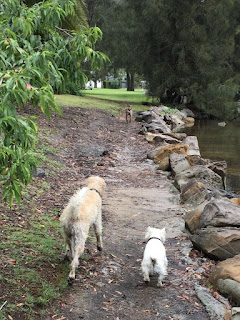 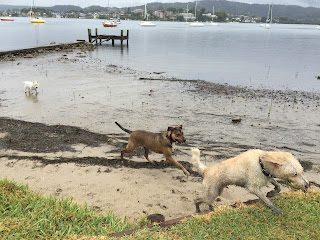 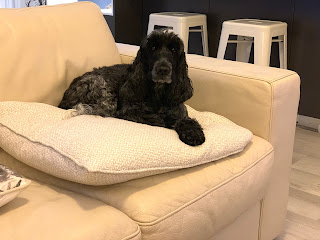 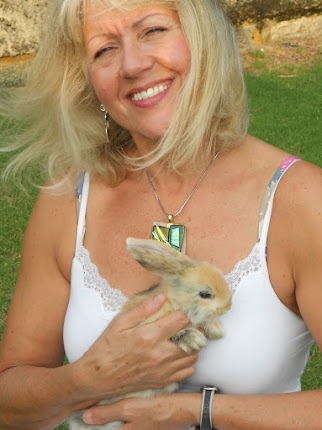